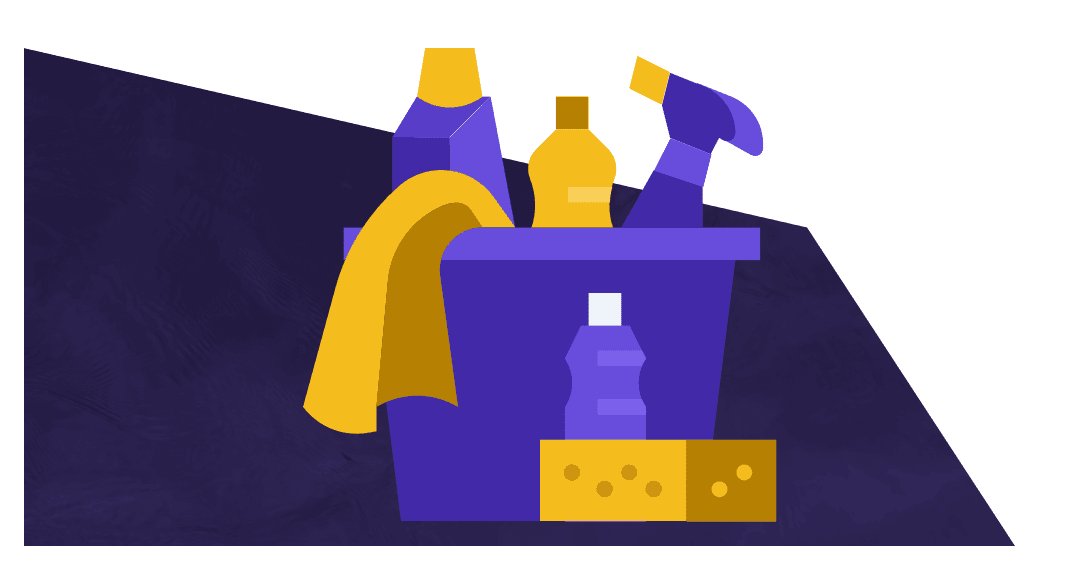 A short time ago cleaning has celebrated its bicentenary as an independent phenomenon worldwide. That conventional European phenomenon with its traditions and features has entered Russian market relatively recently, in the 1990s. The first cleaning representations began to open in Moscow and St. Petersburg. At the very beginning those were offices of western cleaning corporations, which started to operate just to cope with demand of the administrative offices of the same western companies that got to Russia after the fall of the iron curtain. A demand gradually grew, that’s why simple representations turned into the full-fledged branches soon. After a while Russian businessmen have also decided to try their hand in a new field, whereupon the first domestic cleaning companies opened, adopting a foreign experience. Sure it was not just a trend or fashion of indoor cleaning that caused an appearance of cleaning services in the Russian Federation. A variety of finishing materials, different offices and rooms of all possible colours and shapes and the growth of buildings height led to the acute need for special and professional cleaners, who, however, were quite expensive to be on the staff constantly. The cleaning companies, in turn, allowed the offices to focus on their core business, taking upon themselves the solving of every secondary business problem. Further, with the making of a modern type of busy person with his constant lack of time for household chores, a private individual with his apartment has got a need for cleaning services too. Even the notorious year of 1998 did not prevent the booming development of the field and during the 2000s and 2010s the number of indoor cleaning market players, their geography and coverage invariably grew keeping up the speed.

What did that booming development result in this day? It has led to several conclusions and a certain stalemate, which, however, has a way out currently. During almost three last decades the cleaning companies have kept not only growth, but also a growth rate, as the demand for their services continued and continues nowadays to remain high. Any competition among cleaning market players does not become a problem, but a catastrophic shortage of personnel stands out sharply as never before. The constant increase in the number of cleanups led to a lot of pressure on staff, the total amount of orders exceeding the production capacity of a cleaning company led to an administrative chaos (it was particularly acute at the turn of the two last decades). In 2011–2012, a cleaning business tried to get out of that scenario in several ways: The first method, unfortunately, has temporarily brought just an illusory relief, aggravating the common chronic problem, that has taken deep root in a Russian market. The second option is much more contributed to its solving, but rather inefficiently. An amount of those, who wish to perform a low-classified work for a small fee and with a chaotic schedule, depending on the «saltatory» load of orders, has already decreased inversely with the growth of customers and today the possibilities to increase the staff are very limited. Cleaning companies are forced to reduce the requirements for the qualification of new workers (even trying to attract labour migrants from the Central Asia and China), that consistently leads to a decline in the quality of cleanups and, respectively, to numerous negative reviews, which are almost fatal for new cleaning market players. It suggests a logical conclusion that those, who entered that market earlier, have managed to receive the best from it, have managed to develop a permanent customer base and are able to stay at their level longer, getting the most lucrative contracts. That is why, according to the Discovery Research Group, 2/3 of the Moscow cleaning market are separated by 8 largest (and fairly old) cleaning companies, and only one-third is distributed among the remaining six dozen agencies. Current trends of monopolization gradually began to move here. How, at that time, should small companies react, when they seem to have bona fide cleaners, good reviews, and working quality control, but not enough customers who, despite the huge demand for cleaning services, still appeal only for large and acknowledged by time agencies?

Three years ago, the market gave an answer to this question itself: it is necessary to look for new forms of interaction with the buyers and to attract them with something else. A some revolution on the market of cleaning services was made by the Qlean project.

Qlean was established in 2015 by Alexander Korovin, Nikita Pavlov and Nikita Repeshko, by persons who don’t have any impressive experience in cleaning service or in the service sector en bloc. Nevertheless, the birth of a new startup created an effect equal to the hydrogen explosion. In the first months the company showed almost hourly growth, the entire list of Russian business media wrote about it and by the end of 2016 Qlean was 16 times bigger than at the beginning. Now the startup has more than 1,000 employees who clean up about 700 apartments per day from Kaliningrad to Krasnoyarsk. In fact, it was Qlean that made cognominal services as popular as frequently we hear about them now.

But exactly what kind of revolution has Qlean made in the universe of cleaning? It’s the same thing, through which the taxi changed after the appearance of Uber. It is a model of interaction with the client, now called Uber-like or Uber for X. Namely, the direct connection between the order performer and the customer. We wrote about the Uber-like model earlier, but it should be explained that Qlean, based on this construction, works with the automatic matching of order parameters with cleaner characteristics, while the selection system takes into account a sufficient number of factors: from the immediate characteristics of the apartment and the number of rooms to the level of reviews about the cleaner himself. The filing process is simplified to the limit, Qlean has not only a website, but also mobile applications with which every user can order a cleaning at any time, in any place and under any conditions. That primitive but quite effective Uber for X scheme has become some kind of panacea which had been lacking for users who are serviced by the cumbersome and outdated cleaning businesses of the old type, especially with the aforementioned “schedule games”. Moreover, the appearance of a player of a new generation forced the “old guard” to develop, to grow and began to bring the general level of cleaning service to a step higher.

The Qlean Revolution once again has demonstrated the advantages of the “customer < — > performer” Uber-like model over the traditional “customer < — > firm < — > performer” scheme. Moreover, the Uber option, originally implemented in a taxi, this time turned out to be successfully applied in the field of indoor cleaning, i.e. Uber for X has fully proved its universatility and the best chances of successful implementation in any service sector and perfect work there.

Nevertheless, Qlean failed to resolve all the traditional problems in cleaning area, despite it indicated the direction necessary for the development of modern companies. Namely, after reading the reviews, it becomes definitely clear that the quality of startup’s cleanups leave much to be desired. A low level of services depends on two reasons and the success of the startup lays in the single one.

First of all, Qlean entered the market quite late, when the majority of cleaning companies had already divided a client base, when all really professional cleaners had already found their permanent jobs, when the capacity of professional staff was at a catastrophically low level. These conditions coupled with the Qlean creators’ ambitiousness of building the largest cleaning system resulted in extremely low requirements for new employees. Even an additional education and training courses have failed to turn over this shortcoming in a big way. Secondly, Qlean was at risk of weak services control and, accordingly, of poor quality of their provision as a start-up with a low level of investment from the very beginning. The problem got particularly acute under Russian market conditions, where there is no licensing of such profession as a janitor or room cleaner. But taking into account the explosive growth of the project in the early years and its decline in the following ones, we can say that it was the Uber-like model as the basis of the business, that became the key reason of Qlean success.

Today, in 2018, many modern cleaning companies have a good opportunity to use the experience of the past decades and to create their own formula to succeed in the business. Nevertheless, there are two absolute truths that will underlie any of these formulas. This recipe for success was made possible most of all by the Qlean experience:

— Uber-like model, implemented in a mobile application, is able to raise any service to a new level. Some companies still fear that innovation, however, this model has repeatedly proved its vitality and profitability. Moreover, a small number of competitors with a similar scheme of interaction with the consumer will clearly push the company, that uses it, into the vanguard of the entire cleaning industry;

— High service quality, a solid control over it and well-established clientele, which trusts the company and its employees.

In the near future the mix of these two elements will be the major factor of company progress not only in the field of cleaning, but also in the service sector en bloc. Modern sales growth is based foremost on Uber-like model and the quality of provided services. The other elements the can be changed by the company depending on its own priorities

If you have any follow-up questions or you want to get to know more about how to become a successful cleaning company, you can always email us at info@icerockdev.com or visit our website.