Marketing wasn’t built in a day 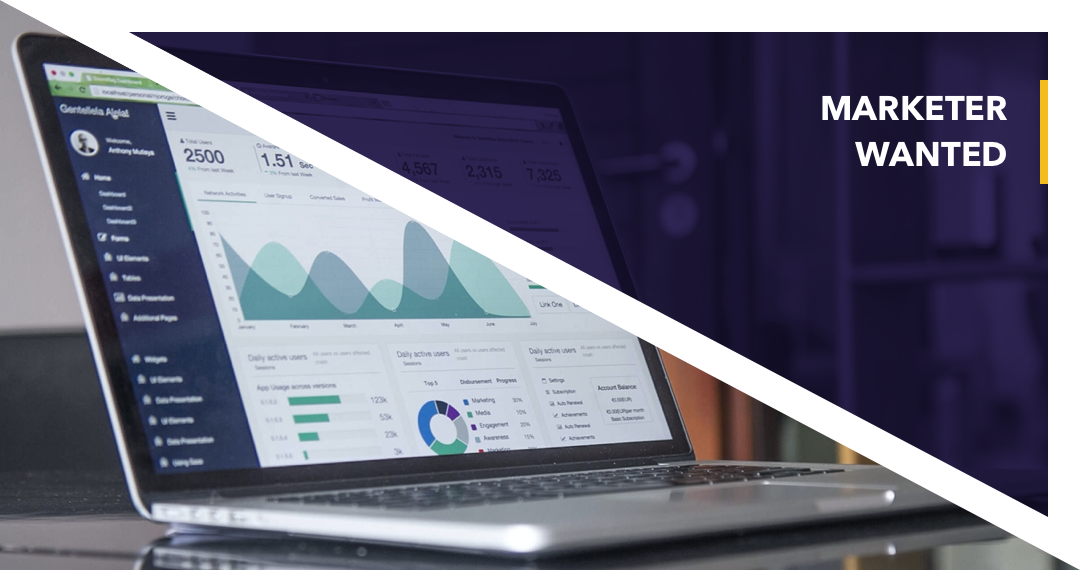 «Panem et circenses!», that’s how a Roman poet and satirist Juvenal regretted the basic wishes of his contemporaries. That expression came into our lives as “Bread and circuses!” statement. But if a bread may find its buyers with ease, due to their natural needs, then circuses, which include various services, require a special approach. This approach requires a special strategy. The key to create that special strategy is marketing.

Let’s imagine, for example, a situation where you can either offer a certain“Z“ shop to sell to it a batch of bread at a wholesale price, which it then will resell to an average buyer at a retail price, or offer it to find the buyers with a fatter wallet than those, who usually come to the shop. In addition, the “Z” shop will be forced to buy a batch of bread from another supplier, spending money both there and on you. Most retailers will choose the first option: the costs are less, the problems are fewer, the profit is still positive and it will stay the same. It means that even legal entities would rather prefer panem than circences. However, if you look at the situation from the strategic point of view, the details and an overall picture will change, transforming the advantage in favour of the second option.

A well-structured marketing system is capable at a slightly higher investment costs not only to bring the company to a higher profit, but also to recoup all investments much faster. New opportunities for further business development will become available faster and you will receive all necessary tools to get through the difficulties of competition to the stars much earlier. It’s all thanks to marketing. 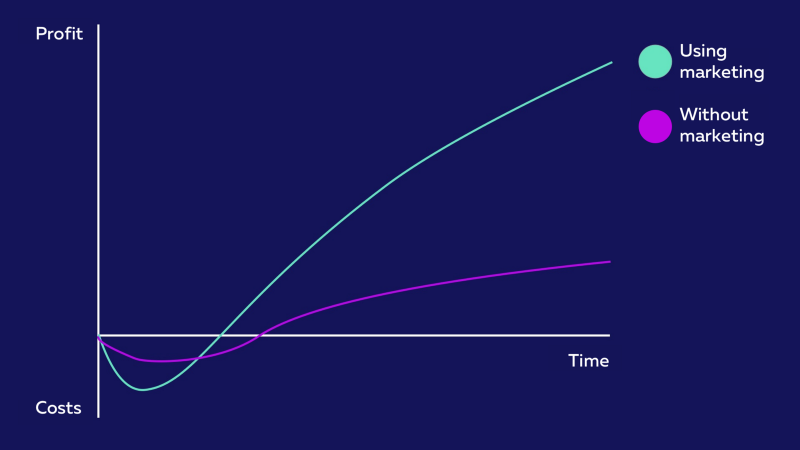 You can turn a profit much quicker with marketing tools

Let’s fantasize next scenario for illustrative purposes: what should the company do if it has already got proven on the market and has managed to turn a profit, herewith without any help of marketers, whose services it didn’t use at all? The answer is extremely simple: a marketing will benefit at any stage of company development: if the business is booming, if it isn’t going well and key indicators are dropping, and even in a stalemate, when nobody can definitely evaluate whether a project profitable or loss-making.

The most important thing is to understand that marketing wasn’t and won’t become just a battery that is put in a flashlight to make it shining and working. A marketing is an extensive mix of tactical and strategic actions that pursue specific targets. A huge mistake many directors and marketers make is that an increase of company profit is often set as the goal of all PR activities. This is quite wrong, because such a goal should be main for every department. The marketing has slightly different tasks. 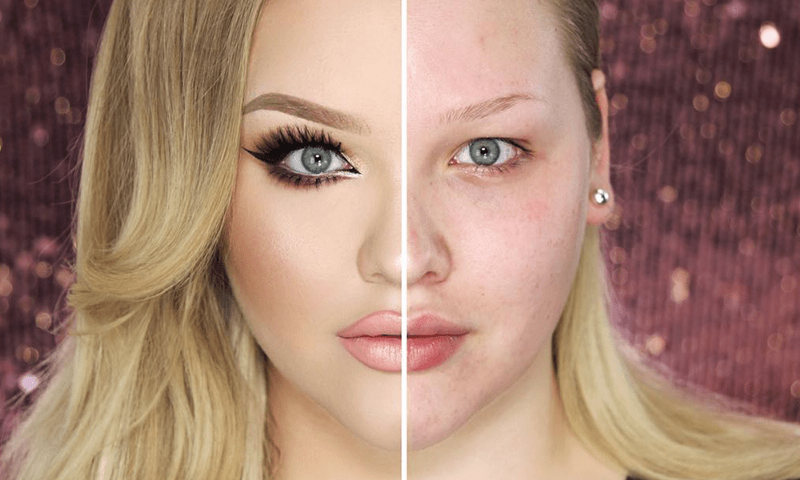 First of all, a marketing has to become a beautician of the company, shaping and creating its face, its image, its attractiveness, an appearance, which the company will be judged by. In the era of mass phenomenon of startups, it has become much easier to find a unique idea or a niche that will impress the target audience. However, quite often this idea doesn’t reach the final consumer, who just can’t notice any thoughtful suggestion among the mountains of frank spam under modern conditions of information clogging. A highly skilled marketer is able to display company’s killer features, leading the consumer to the idea as a lighthouse at the darkest night.

Marketing, secondly, is like a flirt before relationship, when it’s important to interest, to whet appetites, to attract and to lead a consumer, who needs some hot stuff, closer to the company, to sales department. Here some businesses face the basic problem, when marketer’s duties crosses with the sales manager’s ones. They have to coexist extremely close but in parallel. In reality, they overlap repeatedly and it causes the classic «hogging of the blanket» phenomenon. Unfortunately, it occurs very often and a situation, when there is no understanding how to draw a clear line between marketing and sales management, has become trivial. It is true that uncoordinated and spontaneous interaction of both managers isn’t beneficial for everyone as well as for the entire company.

In the hands of marketer there is variety of tools to achieve his goals, and they are massively more than the sales manager has. Possibilities of marketer to combine them or use separately in order are massively higher: working with mass media, notorious contextual advertising, networking, blogging, SMM and link building. The main uniting element throughout the resulting pudding is a common idea, forcing all items to work as a single engine, as a system, smoothly and consistently. No harm done if you sometimes allow a duplication of news and announcements or any other actions, mutual complement of ad campaigns with each other and variable deviations of common strategy, playing with different promotion tools. When this system works, the marketer’s hands get untied.

At the same time the management of the entire system requires certain efforts. It’s strictly unacceptable, for example, to have mutual contradictions in promotion, strong downfalls of marketing campaigns and late use of promotion actions, as well as their complete copying of each other: each marketing tool is directed to its own client pool with its specific and unique features and needs. 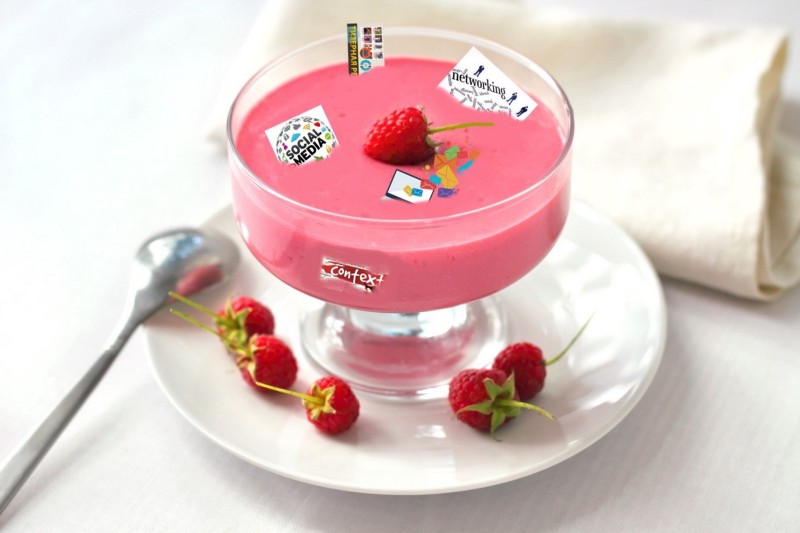 An ideal recipe of marketing from marketer chef

You can start the conveyor engine at full capacity only after synchronizing of all the means of promotion. That’s why a marketing, thirdly, is a single organism, where every organ have to, on the one hand, carry out its own tasks and functions, but, on the other hand, they all should have a common goal and be tailored precisely on its reaching. Here we can face some pretty expectable and hackneyed difficulties. There is a myriad of quantities of tools for promotion, each of them requires support and timely adjustment, while the marketer still must have some time to conduct analytical research on the results of his campaigns. This is where the classic downfalls of the entire marketing system appear because some of the once used tools get abandoned or there is worse course of events: a company promotes a product with a halfway figured due to lack of time marketing tool, that eventually negatively affects its image. 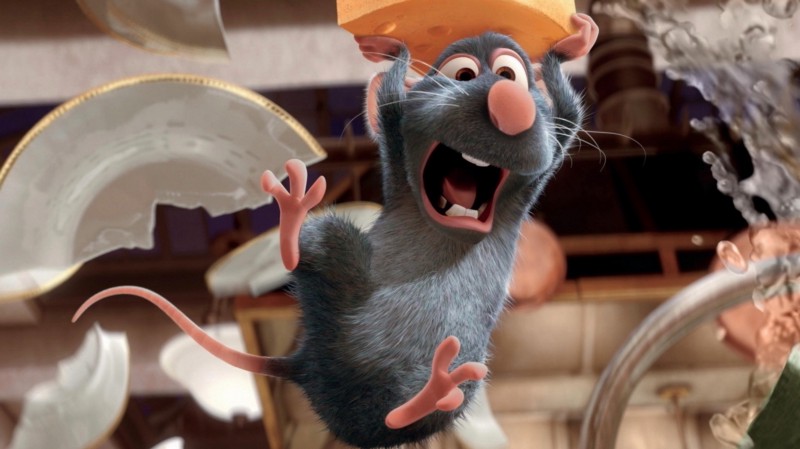 All marketing system can get stuck due to wrong planning (Source: Ratatouille movie)

There is an elementary solution: to start small. Rome wasn’t built in a day. It isn’t worth to hurry and to try to involve every possible promotion tool at one stroke, if it is too hard, because the efficiency of the system is the most important thing. Let it be small at the beginning, but it will already be useful and client-bringing. Ultimately, a formed marketing structure is like an intelligent teenager who is able to absorb various ways of promotion and variable information in systematic and consistent ways and to help the marketer to play with interesting topics, often causing some hype for burning trends and setting the tone for promotion tactics and strategies. For example, good qualitative networking can independently bring customers that the marketer didn’t dare to dream about.

In conclusion, it is necessary to say that the marketing is the paint that can colour the company’s ordinary blank canvas and turn it into a masterpiece that gathers enormous masses of people just to see it. That’s fabulously beautiful, but, nevertheless, pretty achievable trophy for every marketer and every company.